This afternoon, I went to the Local Motors micro-factory. I was reading about their car, the Rally Fighter, on a car blog and got to clicking on their site. Lo and behold, Local Motors happens to be located in Phoenix, where I am vacationing for Christmas with the Thompson extended family. Sweet. I dispatched an email regarding a tour and got a phone call yesterday that a tour could be done today. Rock on!

Let me introduce you a bit to Local Motors. This company seeks to fill niches in the automotive market with vehicles designed by a collaborative community and fabricated in a local micro-factory, partly with the owner-to-be's labor. Local Motors is a startup, and they are now rolling the first production-spec models out of their factory. Cars are aimed at the local market, meaning they have special appeal to the region in which they are produced. Their first car is an offroad rally design for desert racing, and it's called the Rally Fighter. Feast your eyes on this: 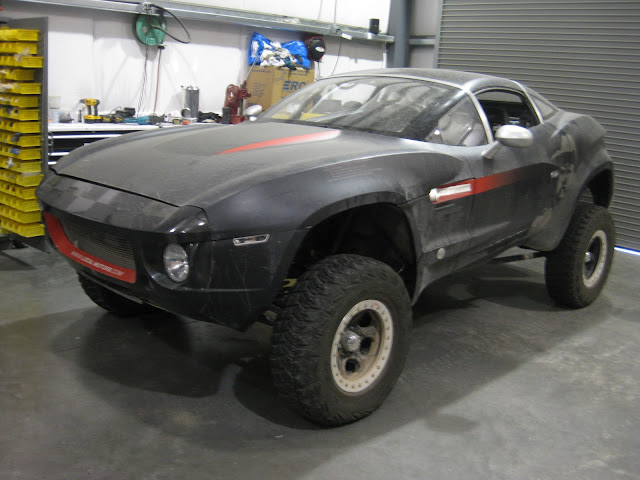 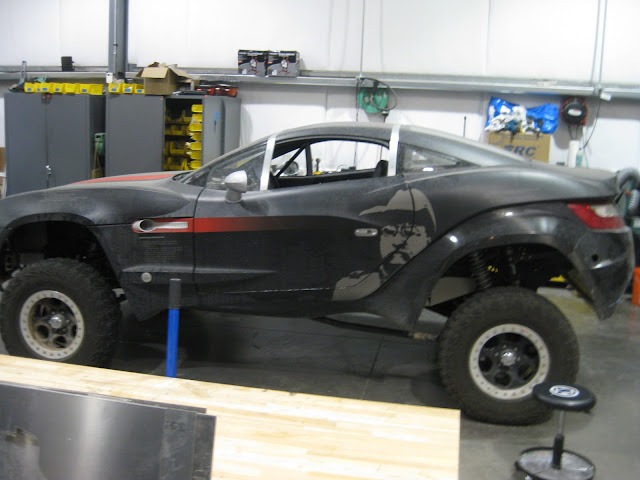 It's a 430 horsepower, 20-inch suspension travel, 3500lb... er, what is it? Well, a monster, but it looks like someone popped the body off of a sports car and popped it on an offroad truck frame for giggles. No wait, that would be these rednecks from Manti: 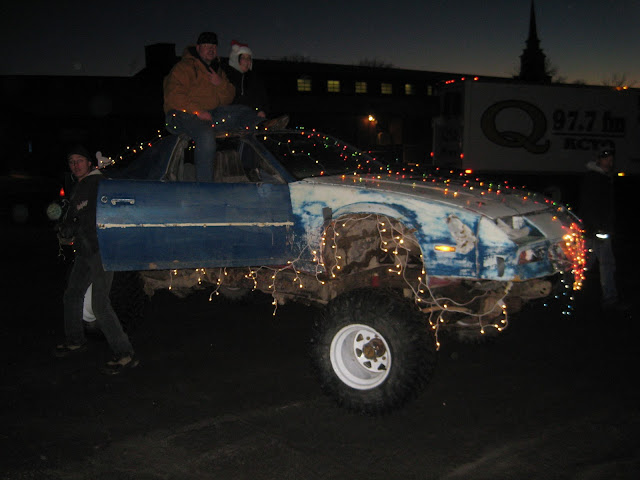 Not quite the same effect. (I mean, cool... but I like the Rally Fighter better) Back the task of defining the RF. What is it? Well, it doesn't fit into any existing car market, and that's exactly the point- it fills a gap in the auto market that's too small for any of the large automakers to feasibly target, but which has enough demand to make people like me drool over their product. Local Motors isn't a desert racing vehicle company, it just so happens that their first product is a desert racer. They've got designs on the table for sports cars, electric vehicles, and tiny city-dweller transportation. As the company grows, it will pop up other micro-factories in markets suitable for their newest designs.

Let's get back to the Rally Fighter. It starts out as a tube-steel chassis: 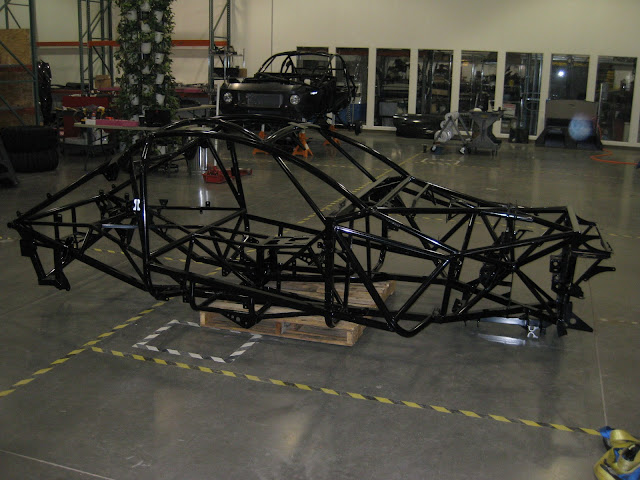 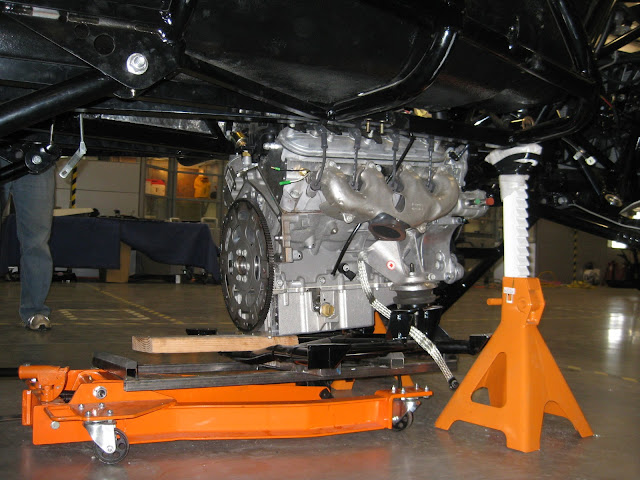 ...and some enormously huge rear shocks, 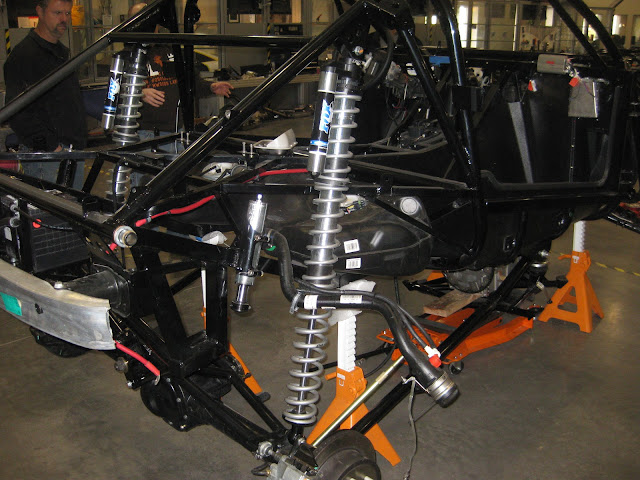 (it's hard to judge the size of these in the picture- they're about 48" long)
Next they stir in some body panels, bumpers, steering column, axles, and other goodies: 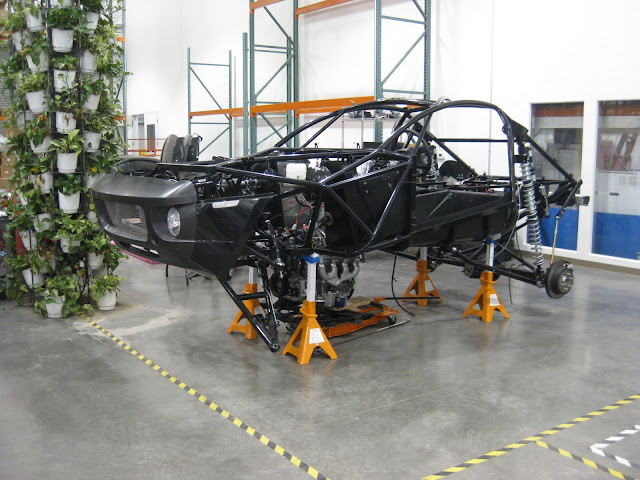 Better get the wiring harness in there: 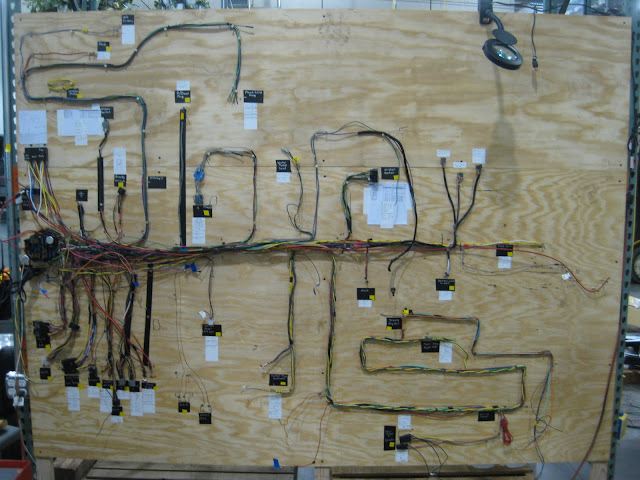 Got to make sure they get something sweet in there as well: 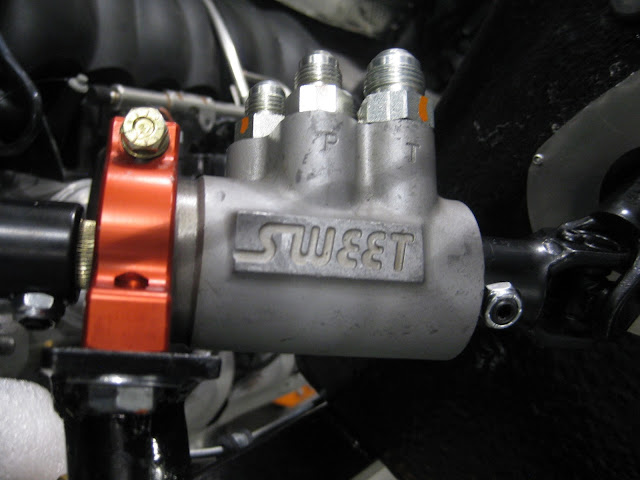 A whole lot more goes into it as well. We got to take a look at the back area where they fabricate the chassis and other parts as well. LM is a pretty small operation right now, and they are able to pound all the cars they are producing right now out of a single jig, which looks like a jungle of steel and vice grips. 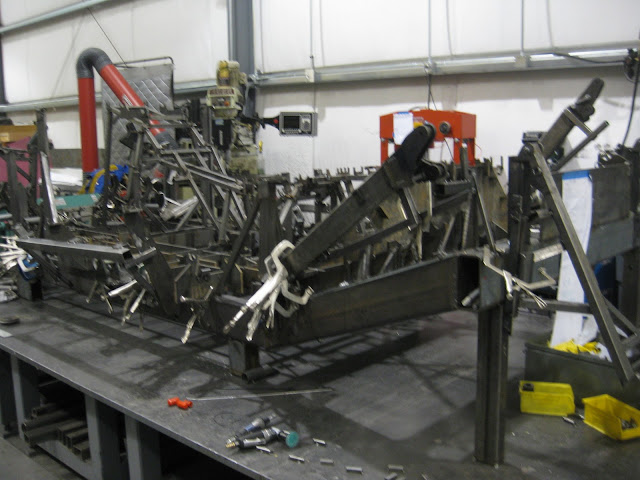 Local Motors is growing fast. They actually only have five of these vehicles produced right now, but they have  132 on backorder with deposits paid. Dadgum. By this time next year, the engineer I spoke with says he thinks they could have all of them out the doors. LM is only producing 2000 of these, so they'll be something of a collectible as well.
I joked about moving to Phoenix a week ago when I arrived and saw five sportbikes in two minutes at a gas station. The climate is pretty boss (except for the past few days) and now there's a sweet small car company looking to explode right here. I could see that happening. I could also see it not happening, but you know.
Here's a slideshow of all the pics I took... I always kick myself for not taking more (and better-framed) pictures, and this set isn't an exception.
Posted by Ned Funnell at 6:33 PM