One of the big items on my to-do list was to sell my truck. I found a buyer in Austin that was willing to pay a $100 deposit on the $1500 truck to have me deliver it. He told me that he wanted to buy it. This works out fairly well because Erik lives in Austin, and I could catch a ride back with him. Because my truck only has a 3-speed transmission installed, I could only go 45 MPH to get good fuel efficiency. I did take it fairly fast(83) and it was surprisingly smooth. In fact, for the last 40 miles or so I cruised at 65 with the flow of traffic, just to get there quicker. It really sucked down the diesel at that speed, though. I ended up running out of fuel the next day on my way to deliver it. Since I had a half-full drum of biodiesel in the back, Erik's parents and I were able to put some in the tank using a coffee mug and a traffic cone. Poor fuel filter, at least I included a spare.
Anyway, I arrive at the buyer's place of work, which was some hippie store. They sold all sorts of all natural hipster products, including biodiesel. Anyway, my buyer ends up being pretty flakey and indecisive. His boss(who knows a bit about diesel vehicles) looks it over and tell him it's a good buy. He takes it out for a test drive and likes it. He then proceeds to ask me for a couple of hours to think it over. Er... okay. I'm with Erik's mom at this point, who has been graciously accommodating my needs for selling my truck. We drive around and run errands for an hour or so before we have nothing left to do, and tell flakeboy that it's time to decide. When we arrive, he tells me that he hopes I won't be angry. Always a good way to start a conversation. Anyway, after about 15 more minutes of sales pitch, I'm convinced that he's intent on backing out. I did have his $100 deposit to cover my fuel/aggravation, however.
Thoroughly discouraged, we drive back to the Franks and I immediately post the truck on Craigslist again, with "Or best offer" and an explanation of my need for immediate sale, hoping to sell it within 24 hours so I wouldn't have to drive all the way back to Longview at 45 MPH, the night before I have a final at 7:30AM.
I get a few calls that night, two serious-sounding guys and a hippy girl with no money. Sunday, I didn't hear back from the first guy, the second guy couldn't work on my schedule. However, I got another call the next day from a farmer who sounded very seriously interested. He drove 2 hours to come look at it, but didn't buy because there was no AC, and he had a 10-month old son who needed AC. I thought the truck had AC, but I guess it was just vent. Everything was there except for the compressor. It even made hissing noises. Sorry, buddy- didn't mean to waste your time.
My deadline was fast approaching, 5PM. It was 4PM when I finished up with the last guy. While I was speaking with him, I had silenced a call on my cell phone, which I called back right then. Another interested buyer. He lived close and got there around 4:50(partly due to my bad directions. Luckily for me, he was decisive and told me that he would buy the truck about 15 minutes later, while I anxiously gave Erik the good news and asked him to wait while I quickly sealed the deal. Since my buyer came alone, Erik, myself, and the Franks parents followed him to his house(along the route) and completed the sale there. Talk about a photo finish! Already leaving town before I got cash in hand. I asked $1500, I got $1300. I was actually desperate enough to have offered the truck to the friendly farmer for $800, but the AC was a dealbreaker.

All of this was made possible through prayer. I called my parents several times to ask them to pray. Most of the time, I wasn't sure if it was going to be God demonstrating his faithfulness, or teaching me a lesson for doing something stupid(driving to Austin with only $100 deposit). Praise God, he was faithful, is faithful, and will be faithful. He takes care of me.
Posted by Ned Funnell at 11:02 AM No comments:

I've been worried for a long time about storing all my stuff while I'm gone from May until December. Accomodations for summer aren't bad, but I'm gone for the fall semester too, so I can't use any of the summer options.

So I bought a van.

What? Well, it was $500- I sold the engine to a guy I know for $250, and it also has a transmission that will match my truck, a 700R4 with overdrive. The one in my truck now doesn't have overdrive, so I'd get awful highway mileage. 700R4 transmissions usually go for about $150-300. The transmission doesn't matter anymore because I'm selling my truck- but I'm selling the transmission with the truck, so I still get value out of it. I also figured I'd be able to sell some stuff off of the van and make maybe $50-100. (I can, and am) Perfect plan, eh? Park it on campus, lock it up. Essentially free storage, right?

It would have worked great, but security got wind of the lack of engine and it got noted as a "Junk Vehicle". Handbook says no junk vehicles allowed on campus, it has to go- this interferes with my plan to store stuff in it all year; obviously. So ever since I got the no-go from security I've been trying to figure out a place to park my vehicle for the better part of a year, for free. I'd had no luck. I even tried to convince security to make an exception(yeah right). Well, today I got two offers to let me store it off-campus. Woot! One from my RA and another from my pastor.

With effort and prayer, things are falling into place.

Here's a picture of the van from when I bought it: 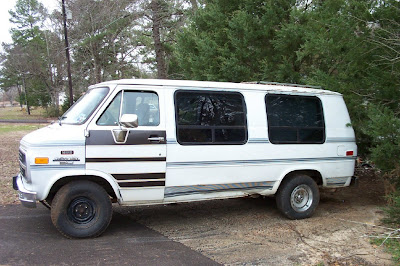 You can see how gracious it is for someone to let me park this on their property! It's one ugly son of a gun. It was a conversion van with fancy seats and stuff, but I gutted it so it's just bare metal inside. Just finished that today. It was a nasty job, as the previous owner let cats live in it.
Posted by Ned Funnell at 5:47 PM No comments:

I got my laptop today. I bought it since lugging a desktop over to Korea would be bad. What would I do about a monitor? Getting a laptop is a better solution. So now I'm trying to sell my computer to semi-finance the new laptop purchase. I'm also trying to sell my truck, as I am semi-likely to be buying my parents Montero for cheap once they take over the payments on my brother's Accord.

Let me rewind there for the uninitiated: My brother is moving to Australia for the excellent reason of marrying an Australian. My parents are possibly going to take over payments on his Honda, and sell me their Montero to me for cheap.

I am going to be in Australia for the wedding directly before I go to Korea. I'm also going to Alaska for the bulk of the summer, volunteering at a bible camp, which is run by the father of one of my floor buddies.
So here's my schedule:
May 3 - Leave Longview TX to fly home to Uxbridge MA.
May 23-26 - Drive back to TX in newly acquired Montero(hopefully) OR fly back in case of no car.
May 27 - Fly from DFW to Anchorage, AK to Port Alsworth, camp location.
August 6 - Fly from Anchorage, AK to Seattle, then Seattle to Los Angeles. Depart from LAX.
August 7 - Spend all of this day in air.
August 8 - Stop in Auckland, continue to Brisbane. My birthday!
August 8-15 - Jake's wedding and festivities.
August 16 - Depart Brisbane to Kuala Lumpur. Spend night in Airport (Apparently!)
August 17 - Arrive Seoul/Incheon.
August 17 - beginning of semester Make way to Pohang from Seoul (Hitchhike? Train? Walk?)
Beginning of semester - end of semester - Infiltrate Handong, acquire knowledge.
December 15 -17 - Tour Korea/Seoul with new Korean friends.
December 17 - Depart Seoul.
December 18 - Arrive DFW via Houston.
After that, I'm out of planning juice. Will get more later.
Posted by Ned Funnell at 1:14 PM No comments:

I chose the name for this blog because of a song by Five Iron Frenzy of the same name. It's a very inspiring song. It also fits the purpose that I am creating this blog for- to keep in touch during long-term travel; that is to say, while I'm on distant shores.

I have been scarred so deep by life and cold despair,
and brittle bones were broken far beyond repair.
I have leveled lies so deep, the truth may never find.
And inside my faithless heart, I stole things never mine.

If mercy falls upon the broken and the poor,
Dear Father, I will see you, there on distant shores.

I have toiled for countless years and ever felt the cost,
and I've been burned by this world's cold,
like leaves beneath the frost.
On my knees I've crawled to You, bleeding myself dry.
But the price of life is more, than I could ever buy.

And off of the blocks,
I was headstrong and proud,
at the front of the line for the card-carrying, highbrowed.
With both eyes fastened tight,
yet unscarred from the fight.
Running at full tilt, my sword pulled from its hilt.
It's funny how these things can slip away,
our frail deeds, the last will wave good-bye.
It's funny how the hope will bleed away,
the citadels we build and fortify. Good-Bye.

Night came and I broke my stride,
I swallowed hard, but never cried.
When grace was easy to forget,
I'd denounce the hypocrites,
casting first stones, killing my own.
You would unscale my blind eyes,
and I stood battered, but more wise,
fighting to accelerate,
shaking free from crippling weight.
With resilience unsurpassed,
I clawed my way to You at last.
And on my knees, I wept at Your feet,
I finally believed, that You still loved me.

Healing hands of God have mercy on our unclean souls once again.
Jesus Christ, Light of the World,
burning bright within our hearts forever.
Freedom means love without condition,
without beginning or an end.
Here's my heart, let it be forever Yours,
only You can make every new day seem so new.