Apparently, hard drives can survive a trip through the washing machine

Last Christmas, I was toting a laptop hard drive around with me during the Very Thompson Christmas. I had just got my laptop back from the repair center and installed an upgraded hard drive, so the stock one was out of the machine. I had it in a protective anti-static back, a little bit of foam, and just because, I put the whole shebang in a sock. Well, during the Christmas visit, all my stuff was sort of piled in a corner because there were so many people all in one house. I had the opportunity to wash clothes, and scooped up all my laundry... including an errant sock containing the hard drive. When I got my laundry out of the washer and heard the distinctive crinkle sound of antistatic, I immediately knew my error. I was SURE that the drive was ruined. Just in case, I stuck it in some rice. Four months later, I pull it out just for giggles to see if it works. Sure enough, when I plugged it into a machine, Windows recognized the drive. It's running a drive integrity test now. If that passes, we'll know that there's something miraculous about this drive.

Edit: it made it for sure.

Hold the presses. I forgot about induction.

In my last post, I lambasted electric stoves as the worst cooking device in the history of the western world. This is true- but only for electric resistance stoves. That is- the normal kind with the coils that get red hot. There is another kind of electric stove that is actually pretty sweet- the electric induction stove. It uses the principle of electromagnetic induction to make the pan itself get hot instead of having a burner. Neat, right? Here's how it works- skip this part if you hate me.

There are two basic kinds of electricity- direct current (DC) and alternating current (AC). The stuff coming out of your house's outlets is AC, the kind from batteries is DC. AC is called alternating because the polarity- the plus and minus- of the electricity is actually switching back and forth. In household electricity, this happens 60 times per second- 60 Hertz. However, when you boost the frequency up a lot, an interesting phenomenon exhibits itself- electromagnetic induction. A changing magnet field will induce (hence induction) electricity to flow in nearby conductors. This is how generators work- a magnet spinning inside of some carefully-placed coils of wire makes electricity flow in the wires. The back-and-forth changing of the polarity of the AC electricity in the induction cooktop does the same thing! It's switching makes the magnetic field's north and south reverse every time it changes. Now, if you bring something electrically conductive near- like the bottom of your steel pot- it will make electricity flow in it. What happens when you have electricity flowing in the bottom of your pot, though? It's the same thing as goes on in your toaster. In your toaster, electricity is flowing through the wires inside- the ones that glow red in there- and it makes them get hot because the wire's resistance to the flow of electricity is having to absorb all that power- it gets converted to heat. So the bottom of your pot is having this electricity induced to flow in the bottom of it, but it's not a complex set of wires- it's just a piece of metal. The electricity then is essentially just a short circuit through the bottom of the pot- but because the pot has resistance, the power gets converted to heat for you to cook with.

(Haters, you can start reading here) The beauty of this is that electromagnetic waves travel across distance. So instead of your pot needing to be perfectly flat on the bottom, it only needs to be reasonably flat enough to stay close to the induction surface and it will still heat up. Now, it can't be inches away- in fact, magnetic waves lose power with distance to a factor cubed (or to the fourth power, I can't remember)- so if you get your pot too far away it won't work. That's fine, though, and good- because your pot is sitting right on the thing, and your metal spoons sitting next to the cooktop are far enough away to stay cool.

So all that means that induction cooktops are incredibly slick. They don't have the primary disadvantage of electric resistance stoves, which is that pots that aren't perfectly flat only heat up in the one spot they make contact. They still have one of the advantages, which is that it's a lot easier to install an electric wire for your stove in your house than it is to run a pipe for a natural gas stove. They also can pump a whole lot more power into your pot, which means you can boil water so quickly that it creates problems with making hard boiled eggs because it heats too fast. However, the primary benefit of electric stoves is lost- initial cost. Electric resistance stoves are cheap, but induction cooktops can't be had for under two grand. That's just the cooktop too- no stove involved.

Another factor though is safety. If your four-year-old flips on the induction cooktop, there won't be an element getting hot for little Bobby to burn himself on, because the stove itself doesn't get hot- the bottom of the pot does. No pot, no hot. It's all metal, though, not just pots- so if little Bobby wears a ring on his finger and sticks it on the turned-on cooktop, that ring's going to heat up something fierce. Check this out: 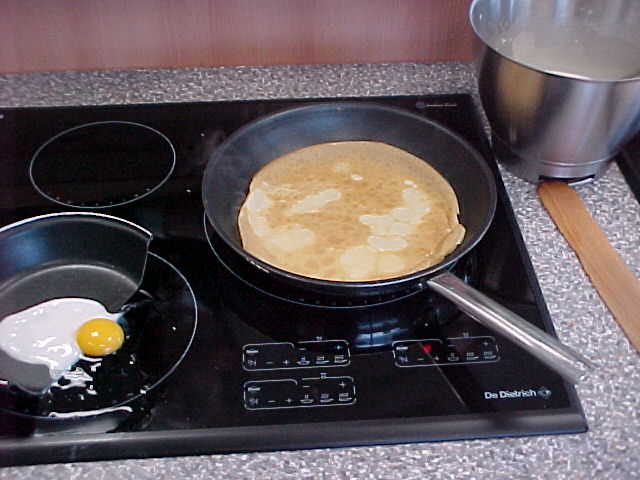 Now, you have to beware of fakers. There are a lot of glass/ceramic surface cooktops out there, but that doesn't mean they're all sweet, sweet induction cooking power. A lot are just electric resistance cooktops in disguise. That's not to say that it's not an improvement- the ceramic top is always going to stay flat, and that will help your pots and pans from distorting as well. Ceramic cooktops are also about a thousand times easier to clean than a coil-based electric stove. I'd take a ceramic surface electric cooktop over a coil-based one any day- but I still wouldn't prefer either to gas. Ceramic cooktops tend to scratch like a son of a gun, and I'd be constantly petrified that I'd drop my cast iron pan on it and break it. How are you supposed to make Real Popcorn on a ceramic surface cooktop? You have to be shaking that pot back and forth like crazy to keep the popcorn moving, and what is that going to to do to your pretty ceramic surface? It's going to kick its trash, that's what its going to do.

So, gas is cheaper to operate, better for cooking on all counts, cheaper than induction, and you can make popcorn. Electric resistance is cheap but bad in all other respects. Electric induction is neat but way expensive and scratch-prone. I'll take the gas stove, please.
Posted by Ned Funnell at 9:13 AM No comments:

If possible, so much as it depends on me, I will never buy American cheese. It is an abomination to mankind as a  processed food product, and it is a crying shame that America wasted our one shot that we got as a nation at naming cheese on a half-plastic 'processed cheese food product'. The Swiss have a good cheese. The French have like twenty. We wasted our cheese name on something that I wonder doesn't come out of an oil well.

If possible, so much as it depends on me, I will never buy an electric stove. Thermal transfer between the heating element and your pan depends on the two surfaces remaining perfectly flat. Of course, the two things that need to remain perfectly flat are two pieces of metal that have a high coefficient of thermal expansion, are likely to see disproportionate heating, and go through several cycles of heating/cooling a day through a delta-T of several hundred degrees. GENIUS! If it doesn't stay flat (every aluminum non-stick pan in the world), then one spot on the pan makes honest-to-goodness contact with the element and the rest has to try and conduct that heat through several millimeters or more of air through radiant and convection heating. Bad news.

If possible, so much as it depends on me, I will spend at least 75% of the rest of my life in a sauna. The Finns are, as a race, the most brilliant people in the world. They're number 1 in sauna use- in fact, in WWII, if you left Finnish troops alone for as little as sixteen hours, they would have cut down some trees, made a sauna, heated it, and all had a steambath by the time you came back. Sixteen hours in the forest. The Finns also produce more winning auto race drivers than any other country in the world. Why wasn't I born finnish? Sauna and rally cars? Who can't love that? Oh, and they check out more library books per capita than any other country and they have sisu.

In conclusion, here is Kimi Räikkönen blasting a Citroën through a rally course. 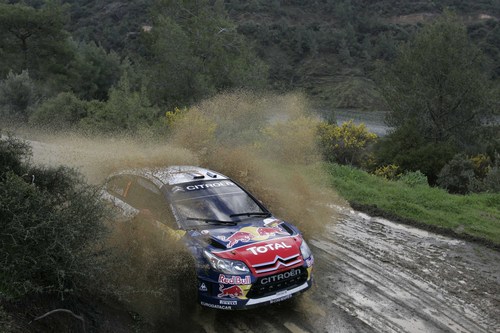