I, like most young bachelors, do not fancy myself to be a master chef. In general, I'd rather bum some leftovers from Jamie Thompson (she's a killer cook) than prepare something for myself. Cooking for one is a drag anyway- you can either spend a lot of time preparing small portions, or cook a normal-sized meal and eat the same thing for a week and a half. Sure, there are ways around this- many turn to Ramen or Easy Mac, or eating out for every meal. I object to those alternatives for health and cost reasons. While it is true that I don't like to cook every night, I do find myself feeling culinarily adventurous from time to time. I've been known to prepare meals from time to time that deviate from the normal bachelor fare. Way back in the summer of 2008 I made fancy chicken parmesan for one just out of boredom- both time-boredom and palate boredom. I was impressed enough with myself that I took a cameraphone picture: 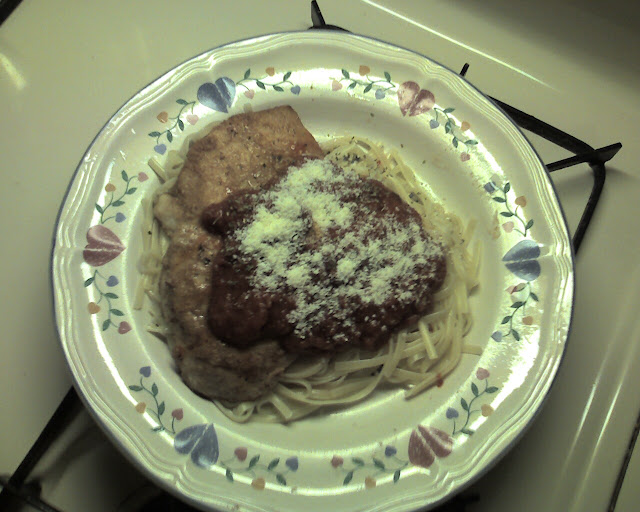 How bad is it that I'm reaching back to 2008 for examples of decent cooking? After all, I am also responsible for this mug-o-oatmeal microwave disaster: 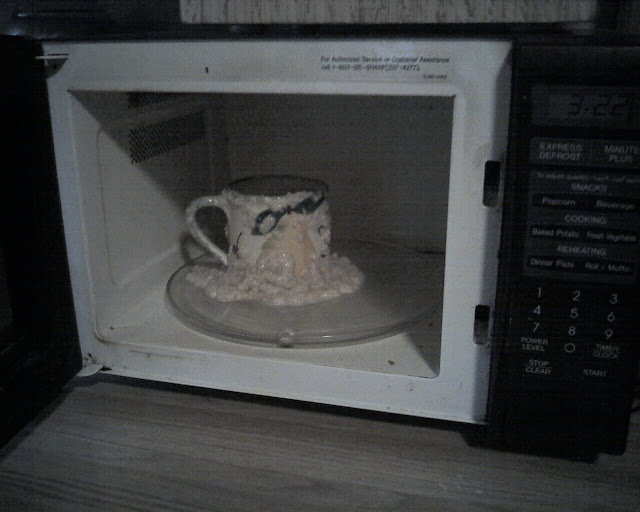 Little cooking anomalies like the chicken do happen from time to time. I find it much more fun to make a dish for a potluck (pitch-in, midwesterners) rather than just cooking for an hour or two and sitting down alone to enjoy it- for me, the return on investment isn't there. If I'm cooking a dish for a group, though, it's much more worth it to me. I've been known to bring a mean pot of chili to a barbecue, and better-than-expected-of-a-bachelor food to gatherings.

The hallmark of my potluck contributions, though, is a recipe for which I can take no credit, but for which I have a great deal of respect- my grandmother Whittingham's cornbread, passed down to me by my father. Many a Saturday morning was spent in the Funnell house eating cornbread made by my dad with whole wheat flour, corn meal, and love. I have lots of memories of spreading molasses or honey on my split-apart slice of cornbread with the rest of my family around our wooden kitchen table. Good times. This cornbread is always made in a cast iron skillet, any other vessel is strictly barred. I made it on a semi-regular basis, and so I found myself creatively borrowing Jamie's skillet to make it, as I had no skillet of my own. Perhaps you'll remember that Jamie got me a skillet of my own for Christmas, and perhaps that is the best testament for my affinity for this cornbread: 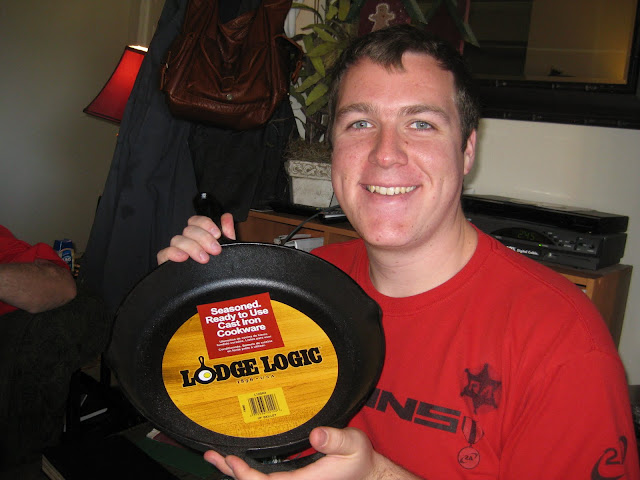 I also made a sweet awesome apple pie a few months ago that I almost forgot about: 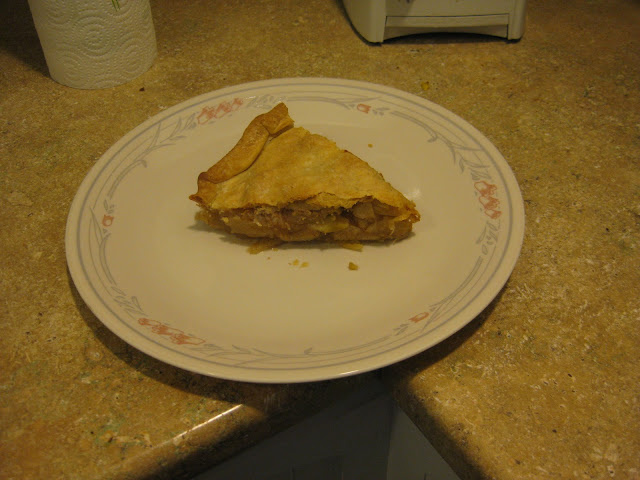 Alright, alright, Ned makes food sometimes. Big whoop. He has to or he'd die. What's the big deal? And who is Zatzeeky, and why is he hanging out with heroes?

Let me explain- 'hero' is one phonetic pronunciation of the Greek word 'gyro', which is a sick-awesome dish made with pita bread, chicken/pork, and a fantastic sauce called 'tzatziki'. Recently, Sarah and I returned from a two-week trip, which meant we both had to restock our fridges. I was lamenting this task aloud and Sarah convinced me to prepare something called a 'meal plan'. I usually just go to the store, grab some staple foods or whatever is on sale, then come back home and say, with a tone of incredulity, "what the heck am I supposed to make with all this stuff?!"

Well, the meal plan turned out to be a good idea but making it meant I had to decide ahead of time what I wanted to make and eat so I could buy the stuff. (How 'bout that) I was trying to think of things more exciting than spaghetti or various soups, when I remembered a meal I'd had, of all places, at Saga, the official cafeteria  of LeTourneau University. (Okay, it's not official, it's a nickname from the 70's that the administration has been trying to defeat for years) This wasn't the new and vastly improved Saga in the new building, no, this is old-building Saga. Now, if you're a LeTourneau student, you think I'm insane, I'm sure, for wanting to reproduce a Saga dish. This was after the Bon Appetit takeover, though, and that makes a difference. The new chef made gyros with tzatziki sauce, and it was quite good. Intriguing, even, as a foreign dish. I liked it, and when making my meal plan, I remembered it.

So gyros it was. What is a gyro? It's a pita (which is a round flatbread) topped with chicken or pork, vegatables of choice (e.g. tomatoes, onions, lettuce), and often tzatziki sauce. You fold it up and eat it like a taco.The sauce is a cool sauce made of yogurt, cucumber, and seasonings/herbs. Sounds kind of complex, eh? It was, especially considering that I couldn't find pita bread at Walmart. I did have tortillas, but I thought that'd be a travesty of a hybrid- Mexican/Greek? No thanks. So get this- I made my own pita bread. DADGUM! That took a while. I won't bore you with the cooking details, but I'll tell you that it still involved some bachelor moves, like using a crock pot as a mixing bowl and substituting pancake mix for flour when I ran out and the dough was super sticky.

A morning of cooking gets you this for lunch: 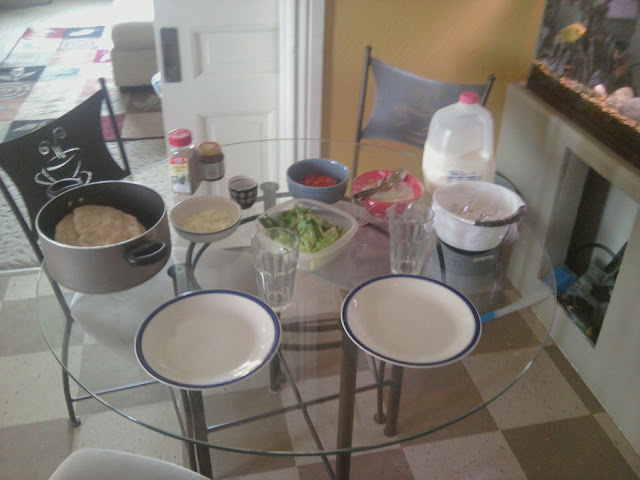 And these are the pitas, which I thought I could make without a rolling pin: 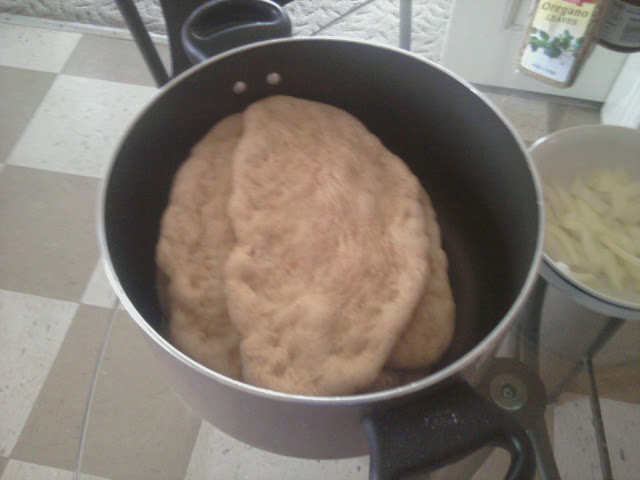 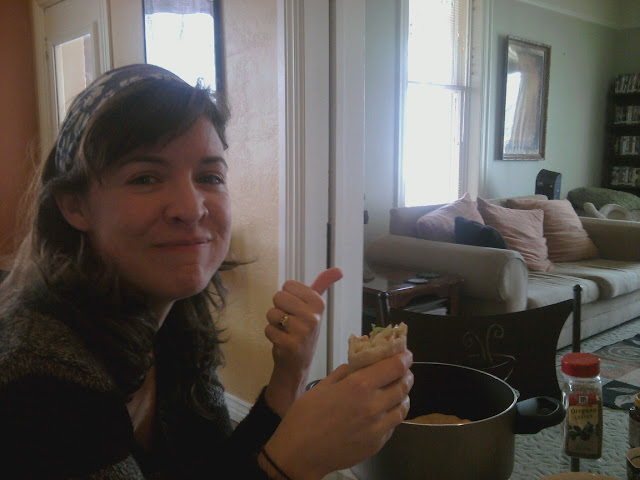 What does this mean for my future? Will this progress in culinary skill and interest continue until I'm an accomplished chef, and turn out to be one of my life's defining features?